LAKE FOREST, Calif. – At some point in one’s bowling career, everything has to go perfect at least once, right? For 75-year-old Temecula resident Al Zaccagnini, that moment came Monday, November 25 at Forest Lanes, when he shot his first-ever perfect 300 game. 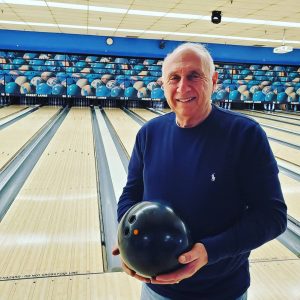 He never thought he would accomplish it, but at 75 years old, Al Zaccagnini was perfect on Nov. 25, 2019. (Jonathan Garza / California Bowling News)

The moment came in his first week back from an eye surgery that kept him away from bowling for a month.

“When I had nine strikes I told myself I had a chance to do it,” Zaccagnini said, “I buried the first one and felt really comfortable, but kept thinking I would mess up and get tapped.”

Bam! Another strike. Bringing him to the all-important twelfth ball.

“I looked at the pins and said to myself, ‘if I hit all 10 pins, they’ll fall,’ and so I let the ball go, watched it roll, hook into the pocket and hit all 10 pins, and they all went down!” he said.

He could not believe what just happened.

Bowling has been in Zaccagnini’s life since he was a child. He helped to keep score for his uncle, who bowled in a blind league at Chicago’s Gateway Bowl.

Unfortunately, it, like many bowling centers in California, closed sometime during or after the 90s, according to the website Bowling History. Today it is home to Easy Cash Solutions, a Pay Day Advance center. A notable bowling legend who used to bowl there was Carmen Salvino.

Fast forward 40 years, and it certainly happened, and it took place on lanes 21 and 22 at Forest, where he also bowls in the Tuesday Mixers league and Rock of Ages on Tuesdays and Wednesdays.

His ball of choice was his trusty Hammer Taboo that was given to him by a teammate at his local bowling center at Temecula Lanes five-and-a-half years ago. 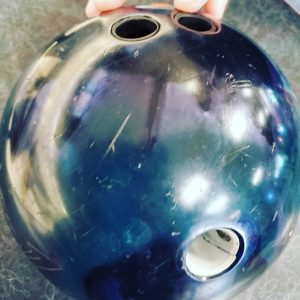 Zaccagnini’s Hammer Taboo has “more chips in it than a marble”. He’s used the same ball for strikes and spares over the last five-and-a-half years. (Jonathan Garza / California Bowling News)

“This young kid helped me out and gave me a ball to get back into bowling, and it’s all I’ve used. It has more chips in it than a marble. It’s the only ball I’ve used,” he said.

Zaccagnini moved came to California from Chicago in 1978, and returned to bowling in 2013 following the death of his wife. She was buried in Lake Forest, close to the bowling center he now calls home.

The year after, in 2014, he started to bowl more frequently. He steadily brought his average up from a 170 to where he stands today.

“I was shocked and in awe, and today (the day after) I couldn’t even bowl a 200 game!” he said, “I called everybody to tell them, but nobody answered; instead I got their answering machines!”

They should be sure to answer their phones the next time Zaccagnini gives them a phone call with exciting news.

“It hit me late Monday night, and it’s all I’ve been talking about,” he said.